Ted, Doug, and Angie are three ex-G.I.s who vow to meet again at a New York bar on October 11, 1955. They all show up on the appointed day, but quickly find that their friendship isn’t what it used to be. However, a program coordinator wants to bring the three men together again on a live TV show. Circumstances are further complicated by a group of gangsters who are after Ted. 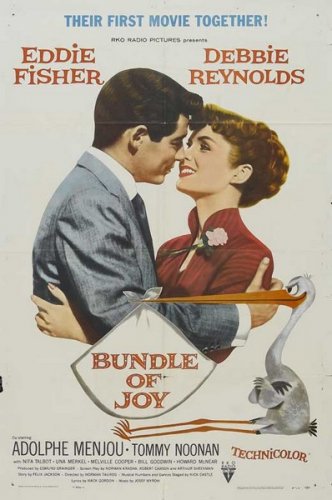 Kitschy musical remake of “Bachelor Mother”. Debbie Reynolds plays an over-eager clerk in a large department store and Eddie Fisher plays the boss’ son. After getting fired from her job, she finds an adorable baby on the steps of the foundling home and the folks inside mistake her for the mother. Fisher, well-meaning, but obtuse, tries to help her out with the baby, and the buds of romance begin to appear. Meanwhile old Merlin, the owner of the store, thinks he just might be a grandfather… A young man falls in love with a beautiful blonde. When he sees her being forced onto a luxury liner, he decides to follow and rescue her. However, he discovers that she is an English heiress who ran away from home and is now being returned to England. He also discovers that his boss is on the ship. To avoid discovery, he disguises himself as the gangster accomplice of a minister, who is actually a gangster on the run from the law. After the Cavity Rock, California Times Leader newspaper is chosen as America’s typical small town newspaper, reporter Homer Smith gets to abroad and report on the war in a series of articles to be shared with other small-town newspapers. He has a number of adventures including having his ship sink while en route to Cairo. He meets another survivor, Philo Cobson, who gives him a message to deliver to a woman in Cairo – should he survive. He delivers the message but convinces himself that an American singer-actress, Marcia Warren, is a spy. She in turn believes he’s the spy. Mistaken identities abound but it all works out in the end. The shooting and murder of two guest stars at the Shady Ridge Summer Theatre, operated by Joan Barry, threatens to close the musical “Fun For All.” To bolster the show, Joan induces Bill Edwards, who shares joint ownership with her, of the farm the theatre is located on, and Sheriff McKenzie, to hire the Jolly Jesters. They steal the show and, along the way, uncover a spy ring and a bullet-shooting clarinet. On a trip to France, millionaire Jervis Pendelton sees an 18 year old girl in an orphanage. Enchanted with her, but mindful of the difference in their ages, he sponsors her to college in New England. She writes him letters, which he doesn’t read. After 3 years, he goes to visit her at a dance, not telling her that he is her benefactor. They fall in love, but the usual movie-type difficulties get in the way before they can get together at the end.